Yugandhara meaning: Bearer of an era

The name is derived from Sanskrit, where its primary meaning is "bearing the yoke, the pole of a carriage, bearer of an era or strongest person of the era".

The Hindu baby name Yugandhara is unique. If you are looking for name with very good meaning, then Yugandhara is a good option. Yugandhara has a great sort of mythological significance attached to it. Yugandhara is not popular in the USA, because it is longer with 4 syllables and difficult to pronunciation too.

Compare Popularity Trend for Yugandhara Vs Other 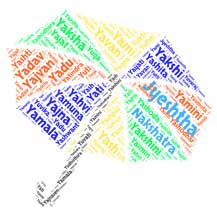