Sanskrit name Naga (Sanskrit: नाग) is a kind of snake or cobra.

Naga is an ancient Sanskrit word which refers to a group of Serpent deities in Hindu and Buddhist mythology who are believed to be mythical creatures lived in the Laotian stretch of Mekong River.
Reference of 7 or 8 of the Naga found in Mahabharata. Certain lexicographers such as Amar Singh, Halayudh and Hemchandra have also made references of this Naga word in their works as the best or most excellent of any kind (ऋषभ, व्याघ्र).
The word Naga refers to different meanings like a formed of snakes(As per Mahabharata), a large mountain, serpent-demons (As per Vishnu Purana), a kind of elephant, belonging to an elephant, shark, cloud.

In our opinion Naga is a old style name. Naga is an ancient name.

Compare Popularity Trend for Naga Vs Other 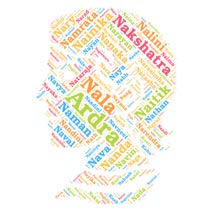