Lamba is a feminine name of Lamb (लम्ब). Reference of Lamba is found in Harivansh (हरिवंश) and Purans where this is the name of a daughter of Daksh (दक्ष) and wife of Dharma (धर्म). Lamba also founds to be mentioned in Sushrut (सुश्रुत) where this word refers to a kind of bitter cucumber.
Mention of name Lamba is also found in Buddhist Literature where Lamba is the name of a female monster (राक्षसी). Lamba is an ancient Sanskrit word means dangling, hanging down, spacious or large.
Lamba is a name of Goddess Durga (दुर्गा), Guri (गौरी) and Lakshmi (लक्ष्मी) as per mentioned in Harivansh (हरिवंश). And also a mother attending Skanda in Mahabharata.

As we can clearly see no graph shown here, So Lamba is not a popular name in either India or the USA. Lamba is used by few people in India as the name of their children.

Name Lamba is the unique name with great mythological significance.

Compare Popularity Trend for Lamba Vs Other 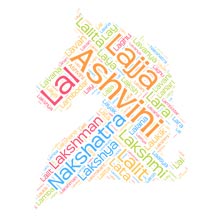