Reference of Jagat is found in Riga Veda, Panini (पाणिनि) and Arthav Veda in which this word refers to moving, locomotive, movable or living. This name also founds to be referred in Shadvinsh-Brahman (षड्विंश-ब्राह्मण) and Latyayan where this word refers to something that is composed in Jagati (जगती) metre.
Lexicographers like Halayudh and Amar Singh have also used this name in their writings in which Jagat is used to show air or wind. Jagat is also mentioned in the Epic Rajtarangini (राजतरंगिणी) where Jagat signifies mankind or people. Jagat means the world or universe as per Ramayana, Rig Veda and Atharv Veda. And it means the earth in the Mahabharata.

In our opinion Jagat is a unique name with a nice meaning attached to it. Jagat is also a short and easy to pronounce name.

Compare Popularity Trend for Jagat Vs Other 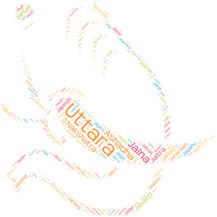