Ancient Sanskrit word Guha (Sanskrit गुह) literally means reared in a secret place, horse, secret one and the concealer. Guha is a name belonging to persons of the writer caste and the unmanifested one.

Guha finds mention in Valmlki Ramayana where Guha is the name of a king of the Nisadas and friend of Rama. Guha is another name for Karttikeya, Lord Siva's son..
Guha is found in the thousand names of Vishnu where this name referred as the chancellor, who hides, nature using his Maya power. The baby name, Guha is another name for Lord Shiva as Lord Shiva hidden in his son Kartikeya..

The Hindu baby name Guha is short and unique. Guha also has a great meaning attached to it. It has variously been used to refer to a number of mythological figures, including Vishnu and Shiva in Hinduism.

Compare Popularity Trend for Guha Vs Other 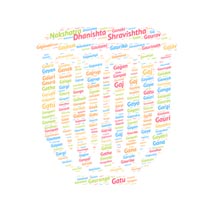